SMAC Corporation was founded in 1990 in Carlsbad, California, USA and has now grown to become a world leader in moving coil technology and is now the largest manufacturer of moving coil actuators in the world.

What is a Moving Coil Actuator?

DC Linear Servo motor based actuators and accompanying controllers covered with over 40 issued patents with another 10 in process.

We are committed to delivering optimal solutions at competitive prices for industrial motion applications.

SMAC electric actuators are unique in that force, position, and speed are totally programmable. They are designed to perform at exceptionally high speeds or very low speeds and with sub-micron accuracy and validatable repeatability with as precise as 1 ms response time. This makes them ideal for a wide range of positioning, measuring, inspection, and pick and place applications, particularly where 100% verification is required.

SMAC Corporate headquarters and main manufacturing is located in Carlsbad, California and has sales and technical support branches around the corner and around the world. SMAC has a design center in New Hampshire where our linear/rotary encoder components are designed and manufactured. SMAC employs approximately 200 people, with over 30% of our employees being qualified engineers. SMAC is ran by engineers, for engineers.

Contact us for more information on SMAC electric actuators.

SMAC began with the target of developing devices that would automate work done by hands and fingers. By combining this capability with competitive prices SMAC believed it could eventually replace older technologies such as pneumatic and ball screw actuators. SMAC begin selling its unique Moving Coil Actuators in 1995, particularly in assembly automation. The core technology is the patented moving coil linear motor. This technology gives SMAC actuators great technical advantages over other electric or pneumatic actuators:

SMAC has combined these technical advantages with a continuous cost down effort (Multi patented) and a worldwide technical support team. The result is steady growth and expanding markets. SMAC’s reachable market has expanded from $25M in 1995 to $750M currently. This trend will continue in an upwards direction. And, in keeping with its target of replacing hands and fingers, SMAC has launched an effort to physically do just that.

SMAC will continue to develop innovative actuators that lead the world in technical capability. Its cost down effort to increase the market for its products - following the concept of 1/3 price reduction leads to 5X increase in potential sales - positions SMAC directly into the largest overall market for actuator in the world. Finally, SMAC’s “Future Products” research arm with achieve its next goal …. Direct replacement of hands and fingers. 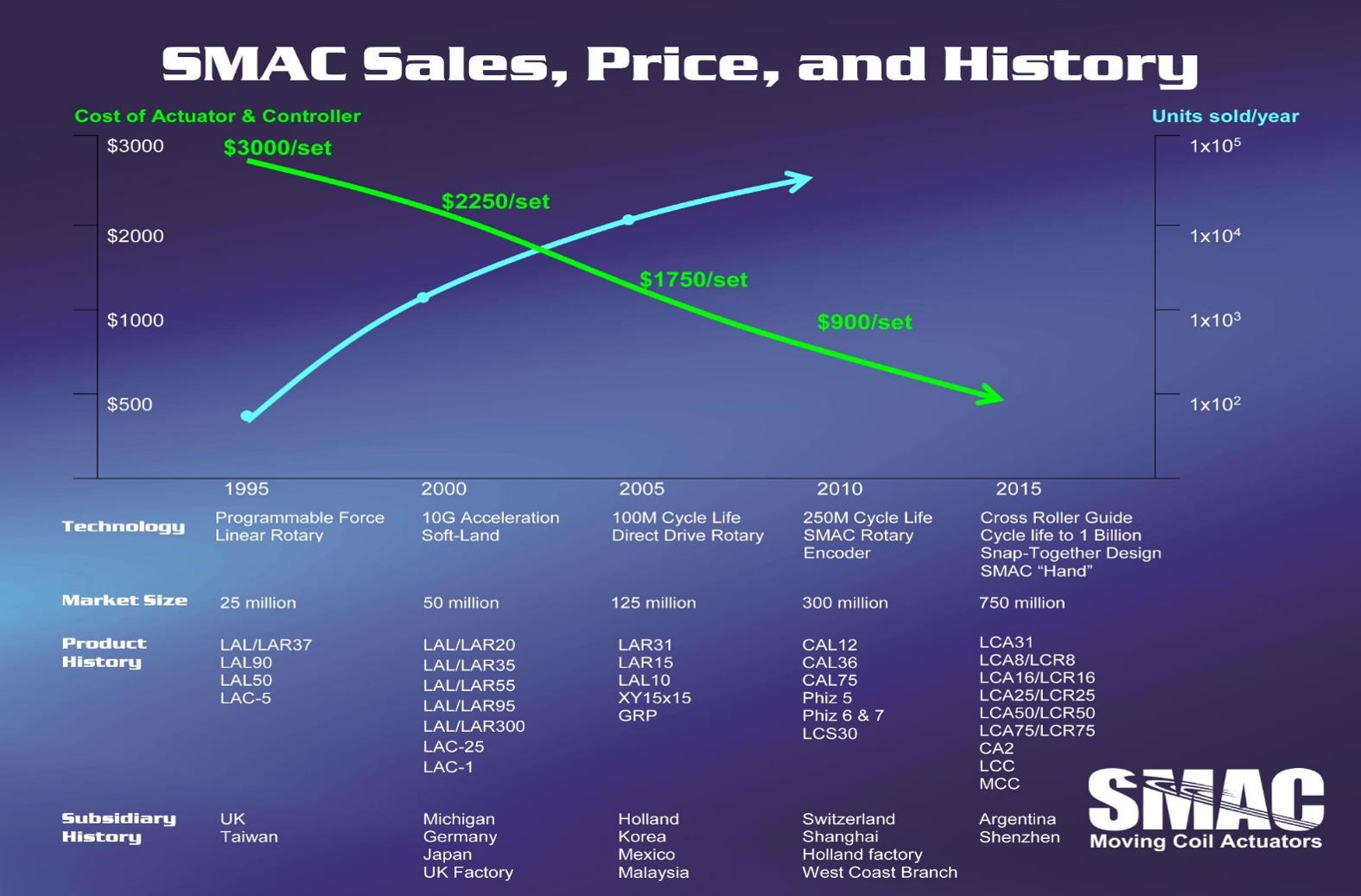